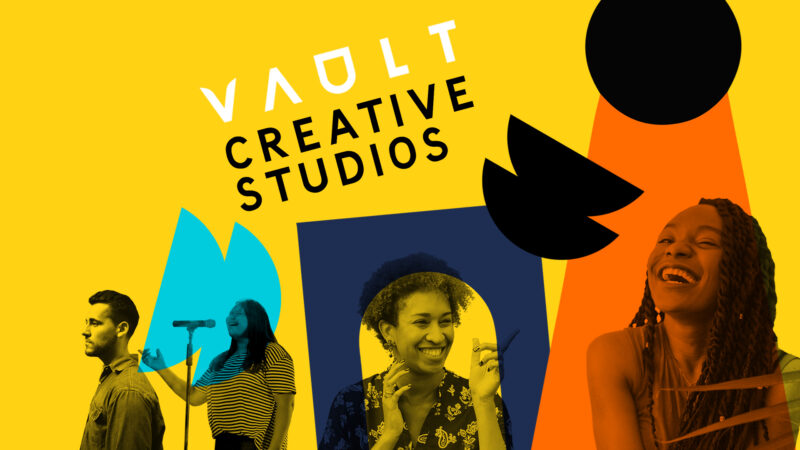 VAULT Creative Studios – our dynamic programme of free rehearsal space, networking opportunities, workshops and panels – has come to an end after a very successful four week run in which we supported more than 500 artists and freelancers. VAULT Creative Studios was set up in the immediate aftermath of the cancellation of VAULT Festival 2022 to provide support, resources and creative opportunities to those most affected by the loss of a live eight week festival programme.

VAULT Space supported over 100 artists and companies with free rehearsal space to use as they wished – for rehearsals, meetings, workshops, content creation and show sharings. An additional videography offer from VAULT Festival ensured that those looking to film their show for programming elsewhere had the means to do so, and the ability to host sharings meant that shows could still gain feedback from an invited live audience.

VAULT Workshops offered 36 online and in-person sessions covering creative development, practical up-skilling and wellbeing support. This strand of the programme enabled over 400 artists and freelancers to discover new skills and elevate existing ones. Alongside workshops and Q&As covering specific creative practises, including Writing for Television with BBC Script Editor Josh Treacy and Tour Booking, offers such as BSL & Deaf Awareness Training, Mental Health First Aid, and Basics of Intimacy Coordination allowed participants to broaden their knowledge of safe, inclusive and accessible ways of working offstage as well as on.

Leading industry figures also contributed to the workshop programme. Les Enfants Terribles’ James Seager reflected on learnings from 20 years with the company, Punchdrunk Enrichment provided an interactive session examining different pathways to producing, and Boundless Theatre presented a one-day festival providing space for artists to imagine and discuss ideas for a better industry. An online discussion with Lyn Gardner and VAULT Festival’s Head of Programming, Bec Martin, examined the challenges facing early-career artists, the changing nature of theatre criticism, and a deep dive into what the future of theatre might look like post-pandemic.

VAULT Connect provided network building opportunities for artists to meet and share ideas. Artists were able to engage through digital events, including Zoom ‘speed dating’ with Off West End and regional venues and organisations, a Q&A with leading Edinburgh Fringe producers and programmers, and a discussion on mental health and wellbeing with Adam Bambrough, CEO & Founder of Wellbeing in the Arts, and trained counsellor Ali Ball. Many of the workshops, panel discussions and talks have been made available for free as Video Resources for Artists which can be accessed here.

VAULT Masterclasses provided space for people to learn brand new creative skills from leading practitioners. Introductory sessions to drag with Me The Drag Queen, and burlesque with House of Burlesque’s Tempest Rose, brought a flavour of VAULT Festival’s famous late night programming to curious beginners. Masterclasses in improvisation with the Free Association and stand-up with Dec Munro, co-founder of Angel Comedy’s The Bill Murray, proved popular not only with those looking to learn the ropes of performing comedy, but also individuals and groups looking to sharpen their self confidence.

The Unrepped Comedy Showcase took place to an invited audience of industry, friends and family, with nine comedians who would have performed at VAULT Festival 2022 performing in a one off event – which provided additional post-show space to meet with agents, promoters and producers.

A bespoke series of opportunities and support were specifically created for freelancers who would have worked on the festival, enabling them to gain new skills, qualifications, and experiences. These included practical workshops in box office, tech, producing, and arts management, courses in first aid, conflict resolution, anti-racism and accessibility training, CV drop in sessions and career advice, and sessions in the skills of live performance, such as writing, performing and directing.

“While the loss of the 2022 Festival was devastating, we’re pleased that VAULT Creative Studios has had such a positive impact on those affected by the closure. The number of individuals taking part in opportunities has been heartening, but has also demonstrated the real need for support across the sector. Both artists and freelancers have experienced huge losses personally, creatively and financially throughout the pandemic, and it’s vital that schemes like VAULT Creative Studios respond and provide solutions to support their efforts, as well as celebrating their talents and work.”

As the sector recovers from the impact of the COVID-19 pandemic, there are numerous ways for fans of VAULT Festival to continue supporting both the festival and year round activity. You can make one-off donations to VAULT Festival and receive exclusive treats as a thank you, including limited edition t-shirts and prints. Find out more here!

The VAULT Membership Scheme allows supporters to help VAULT Creative Arts continue their work of inspiring people to effect positive change through creativity. Membership also directly supports the organisation’s ability to continue to make our Festivals and programmes affordable and accessible to all, develop our opportunities with New and Early-Career artists, and fund important projects locally to spread creativity in the community. Click here to learn more and become a member!

While the loss of the full VAULT Festival 2022 is still acutely felt, VAULT Creative Studios demonstrates the power of targeted support from venues and organisations – and the need to help artists and freelancers at a grassroots level as the sector begins to recover.